Sorry for the lack of posts, but between all the work and wind there hasn’t been a lot of time on the water for me.  I hit Becker with Charlie yesterday and we got almost three hours in before the wind forced us off.  We both landed some nice 16″-18″ rainbows on hoppers and of course missed a few as well.  He landed a nice 18″ Tiger that was the big fish of the morning.  The water is up and reeeaaally clear.

I have hit Big Lake three times with some seriously good fishermen and the biggest fish any of us caught were 14″ Bonnevilles.  There were some Snake River cutt’s in South Cove but not many were landed.  I’m not really sure how many are left in Big.  AZG&F hasn’t stocked the Snakes in three years so numbers are almost certainly down.  For some reason the bigger Bonnevilles just haven’t come in yet??? …as of a week ago.  The water is as good as I’ve seen in years and is up.  Eventually it will turn on.  This Spring has been surprisingly cold at times and the wind has been continuing even into this month??  Life in the mountains…love it.

Show Low has still been putting out some fatty smallmouth.  With the wind kicking up all the time, it has been my go to, even if I only get a few hours on it 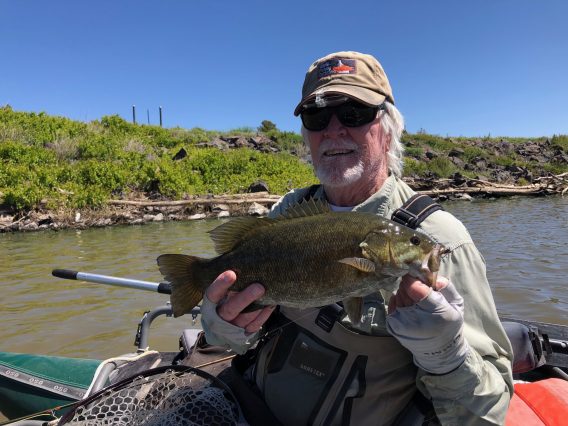 Wish I had a better report but with the rez shut down, it definitely limits our choices.  One good thing about the shutdown is the fish should be in good shape once it reopens….let’s hope sooner than later